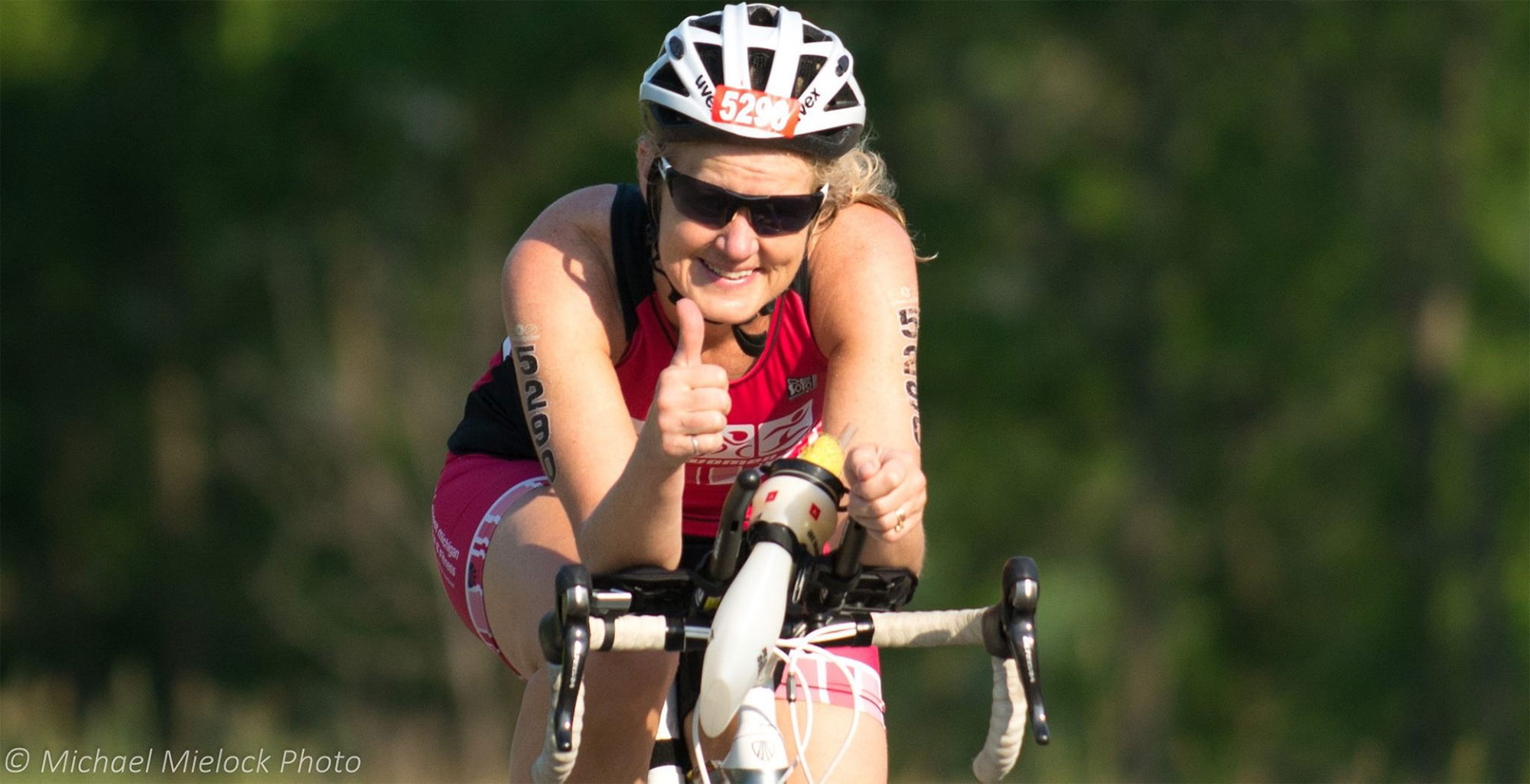 I am a TITAN: going the extra distance right at home

By Chelsea MontesOctober 18, 2019No Comments

When planning to commit to train and compete in a demanding race such as a 140.6 full-distance triathlon, there are many factors that go into the decision. Location is one of the most important ones. Where you decide to race can determine and sway many elements and motivations to your competition plan. While many opt to go for a destination race and treat their race schedule as a vacation spot, there are others that decide that there is an advantage to home soil.

That was the deciding factor for former Grand Rapids resident Gail Ranville, who when she decided to push herself to complete the MITI full-distance triathlon after previously only ever finishing a sprint-distance, it was the proximity to her home that made her commit to the start line – her literally home that is. The 140.6 course when right by her house several times, so imagine the motivation of getting to wave to your front door while testing your physical limitations.

How did you first get involved in triathlon?
A friend said it was on her bucket list and challenged me to join her.

What is your favorite discipline? And strongest?
The bike is my favorite dicipline, but I feel strongest during the run.

What was the first triathlon you ever raced in?
The GR Triathlon, back in 2012 when it was only the second year it was held. I have competed in every GR TRI since! I wish I wouldn’t have missed the inaugural year, but I unfortunately didn’t even know what a triathlon was then.

What made you first decide to race the full 140.6-mile distance?
I wanted to earn the AIM High Endurance award. Part of that challenge included the Half Iron distance at either the GR TRI or the MITI race. I had only ever done the sprint distance at the GR Tri before, so I didn’t know if I could even complete the half distance. So I signed up for both races, just in case I couldn’t finish that distance at the GR TRI in June, then I would have another shot at the MiTi. But I ended up doing just fine at the GR TRI that I then decided to go for the Full Distance in August at Michigan Titanium. I did it!

What was your training schedule like for that race?
I had joined the GR Women’s Tri Team: Real Women Tri and I relied on them to guide me and train with me. They are awesome!

How was your race experience?
It was a tough race, but we lived on Grand River Drive at the time, and the race went right by my house several times which really helped. I also had lots of teammates and friends and family cheering. I finished before the cut off and was first in my age group!

What did you like specifically about the MiTi race experience?
MITI has one of the best swims I have ever encountered at a triathlon. Versluis lake is so beautiful and clear that you can see your feet when you are treading water. It is also usually very very calm.

What advice would you give to someone looking to do the full distance for the first time?
Make a plan. Train with friends. Seek out those who have done the distance before. I do think that doing the full distance race near your home town is a definite advantage.

What makes you a TITAN?
My persistence make me a TITAN!