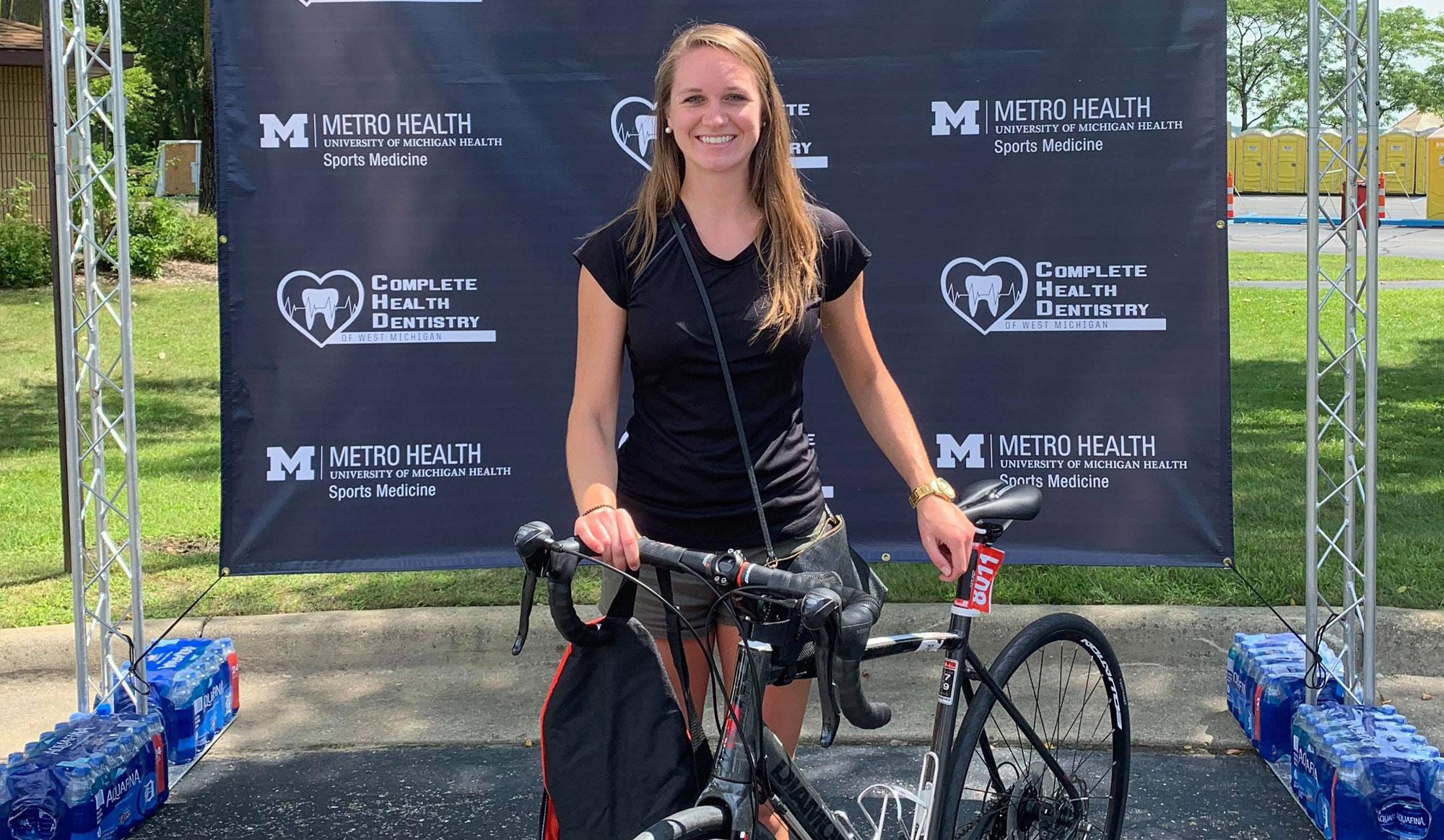 I am a TITAN: How a shortened course couldn’t stop one full-distance triathlete from finishing

Competing in a 140.6-mile full-distance triathlon requires an extreme amount of preparation, both physically and mentally as well as emotionally. Once you decide to take on what can be known as the “beast” of triathlon courses, one of the most important race goals is conquering and finishing that distance. So, when out-of-your-control circumstances disrupt that goal, it can be devastating, but only if you let it.

During this year’s event, an unexpected lightning storm threatened the MiTi experience and ultimately put the safety of the athletes at risk. Race officials were then forced to shorten the distance of the full 140.6 race down to a half-distance. Indiana resident, Lauren Ullrich, who had spent almost a year preparing for the race, decided that since she came ready to complete the full-distance triathlon, she would rather not step up to the starting line at all.

While feeling defeated at first, Ullrich eventually realized that crossing the MiTi finish line on race day was not what makes a Michigan Titanium TITAN, but rather a true TITAN is someone who sets a goal and works hard to accomplish that goal, no matter what it takes. So, on the Monday after the event, Ullrich returned home and decided that if she couldn’t race the intended MiTi full course, she was going to make her own course and still complete the full distance that she always wanted to do. So, using the local pool, her bike trainer and local running paths, Ullrich tracked her distances and ultimately completed a full-distance triathlon, proving that determination trumps everything and as long as you set your mind to something, there is no obstacle that can get in your way! 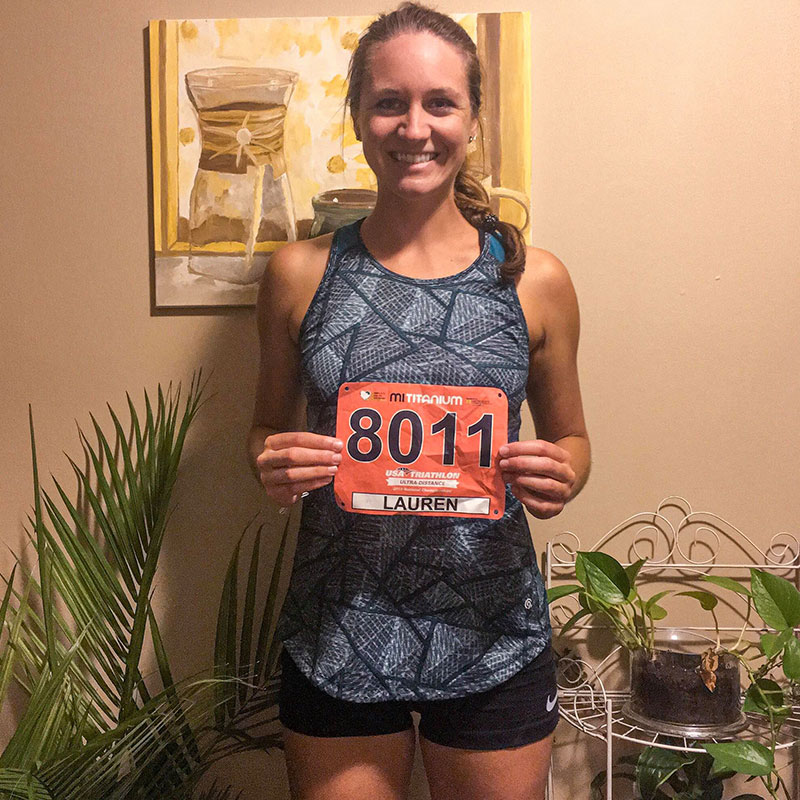 How long did it take you to complete the full-distance triathlon at home on your own?
When I found out they canceled the race (full-distance shortened) due to the weather, I was incredibly disappointed and frustrated and took some time to process it with my friends. I decided it wasn’t worth downgrading to the half not only because there wasn’t even a guarantee I would be able to finish it if there was any lightning but also because the whole point was to do the full. I had trained for it and I was ready. So I left and had a fun day with my friends instead. Then as I was driving back to Indianapolis Sunday afternoon and reflecting on the race, I had the thought to just do it myself so I called my friends and they loved the idea. I had already requested to take off work Monday as a recovery day from the race so I figured I would do it then and would just accept being tired and sore at work on Tuesday. So Monday morning at 4:45, I drove to the YMCA where I had trained and swam the 2.4 miles in an hour and 55 min then drove home and rode on my trainer. I chose to ride on my trainer for safety reasons – with that kind of distance I figured it wasn’t worth the risk of getting stranded somewhere alone if anything happened. But I made the most of the ride by finishing up a book and listening to podcasts, it was actually super fun and the time went by so fast! I typically ride about 16 mph outside so I figured 7 hours on the trainer should cover the distance. Then I drove out to a local trail and ran the 26.2 miles in the 89-degree heat and thick humidity. The run took me about 5 hours and 30 minutes and I finished around 9:45 then went straight home to get some sleep.

How did you get involved in the sport of triathlon?
I started running in college just for fun with my best friend Kelsey and eventually worked my way up to running a full marathon (which at the time I thought was an impossible goal!). I had run about six marathons when I felt like I wanted a new challenge so I signed up for a half Ironman in Muncie, IN. I feel like it’s important to note that I had never done a triathlon before, I didn’t even own a bike and hadn’t swum since taking swim lessons as a kid! So, I had no idea what I was doing but I just really wanted to do the distance and knew I’d be able to figure it out!

What is your favorite discipline and what do you think is your strongest?
My favorite is running, I love it so much! It’s definitely the sport I feel the strongest and most comfortable doing. Even on a bad day, I always feel alive, happy and free after a run. But I also like to tell people that running didn’t always feel easy and I didn’t always like it. It took me about two years until I really started enjoying it!

How did you hear about the MiTi race?
I heard about the race through a friend and did a lot of research to compare races to see which one would be the best fit for me. I chose this one because of the location, cost, course description, and great reviews!

What made you decide to take on the full-distance race in the first place?
I’ve wanted to do the full distance since I signed up for my first half Ironman and the only reason I didn’t sign up for it then was because I had never done a triathlon and thought I needed to work my way up. It also seemed like such a daunting distance and I couldn’t quite fathom doing it! So, after my second Ironman 70.3, I decided I was ready to sign up for the Michigan Titanium. Some of my friends were also training for a full so I knew I would have fun people to train with. I love training by myself but it definitely helped to have supportive friends to keep me accountable and motivated!

How long did you train for the race?
I signed up for the race in Dec. 2018, which is also when I started training for it, so about eight months. I knew going into it that the training would be a huge commitment and I was prepared to invest the time but it still was a challenge to fit everything in while also working full time, managing a side business, keeping up with family/friends, and maintaining my own sanity. But I had also trained for two half Ironmans in the two years prior so I definitely had a strong foundation going into training for the full.

What was your training schedule like? Did it change throughout the seasons?
My weekly training was pretty consistent. I usually woke up at 4:45 to swim or bike for an hour before work and then after work, I would run, bike, or lift weights. On the weekends, I gradually increased my distance for my long rides and runs. I also incorporated brick sessions and would take trips with friends to a state park in southern Indiana to practice riding on hills.

Despite not having the race experience itself, how did it feel accomplishing the completed goal of the full distance?
Even though I didn’t have the race experience, I’m still so glad I decided to do it on my own. I really didn’t want to spend another six weeks to a year training for another one. I was prepared to do it then and am so happy I did! It definitely was a different experience doing it without the other athletes, spectators, and volunteers, but my friends and family sent encouraging texts throughout the day so that made it fun. And the whole reason I wanted to do the race was to show that it’s possible to do the distance and to enjoy it. Even while I was doing it, my mind still had a hard time comprehending what I was doing, but I feel so empowered and proud to accomplish something I wasn’t entirely sure I could even do (and actually have fun doing it!). And I really want other people to know it’s possible for them, even if they don’t have a lot of experience!

Do you have a desire to try it again and get across a finish line?
Honestly, I’m not sure. I don’t feel like I’ve necessarily missed out on anything by not finishing an actual race since my goal was to just complete the distance. Right now, I really want to focus on building my art business so I’ll probably stick with training for the half distance since that’s more feasible with my schedule. But I’m definitely open to training for another full, just maybe in a few years!

What is your advice for someone who is thinking about competing at a full distance level or trying a triathlon for the first time?
I genuinely believe that anyone can do it! The only limitations we have are the ones we put on ourselves. I think it’s important to allow yourself to be a beginner and to work with the fears, frustration, anxiety, and failures that come up, because that is what helps you become stronger. When it comes down to it, fear is really the only thing getting in the way and when we resist fear, then we end up creating more of it. So if you can learn to work with that fear, failure, and discomfort by allowing it to be there as part of the process then there’s really nothing to be afraid of. We are truly capable of so much more than we think!

The MiTi race is celebrating triathletes as being TITANS, what makes you a TITAN?
I’m all about celebrating! I think it’s such an accomplishment for anyone who’s attempted a Michigan Titanium race or any other triathlon or race in general! It takes a lot of courage, strength, and discipline to train for a race, especially when it’s something outside of your comfort zone. So, I hope everyone takes the time to acknowledge how amazing they are, regardless of how well they did or if they even finished! I think the process (and the person you become in the process) is so much more important than the race itself. So to answer your question, I think what makes me a TITAN is that I didn’t let the race cancellation stop me from completing the distance I had trained for; and I got to prove to myself that I’m capable of doing something I wasn’t entirely sure was even possible for me. So I hope this inspires others to believe it’s possible for them too, because it absolutely is!