By Michigan TitaniumNovember 20, 2017No Comments

If you’ve been around running races and triathlons before, you have probably witnessed the actions of

myTEAM TRIUMPH. This great organization has chapters all over the country but was founded here in West Michigan. It allows disabled athletes to compete in events that they could not otherwise participate in. At the Michigan Titanium you will see teams of Angels pulling/pushing Captains on the course, but this year you will also see many of the myTEAM TRIUMPH board members completing their own race. Tim Beurer is one of these individuals.

His involvement began as a challenge during a board meeting. Since mTT has had a few Captains who have earned the AIM High West MI Endurance award (an award you can earn by completing three

endurance sport events here in West MI), the board members challenged themselves to step up and do it as individuals. In order to earn this award, Tim, as the merchandise manager on the mTT board, completed the River Bank Run 25K in May, and he’ll do the Half at MiTi and the GR Marathon in October.

Tim, an IT programmer at Nucraft Furniture, isn’t new to sports. He’s been a hockey player for 40+ years and has coached the sport for nearly two decades. He’s also a familiar face at many running events, having completed six River Bank Runs and five marathons. He’s completed a few Sprint triathlons in the past too, but training for a Half has pushed Tim to different levels as an athlete.

Tim began running about eight years ago as a way to get fit and lose weight, because it was an exercise he could do all on his own without a lot of equipment. Sadly, his father passed away at the age of 45 (Tim’s age now) do to his poor health and excess weight. This motivated Tim to have a longer, healthier life than his father did. Those who know Tim know that finding training partners to help him build to the 70.3-mile distance would be no problem. His warm heart, great smile, and fun personality make it easy for people to want to meet up with him for a long run or dozens of miles on the bike. Other myTEAM TRIUMPH board members have been by his side for a lot of this training and have been encouraging him through texts.

Once a man who never thought he’d do a triathlon or a marathon, Tim has come a long way, especially with the challenge that the mTT board laid down for themselves. Having started training in February, he hits the pool two times a week, bikes two to three times a week, and runs three days a week. His connection with the Gazelle Run Camp helps push him on runs. Tim has been an Angel for myTEAM TRIUMPH at a running events, but with all his training this year he hopes to be an Angel next year for a Captain doing a triathlon.

We wish Tim the best on the course this weekend and as he works towards the AIM High Endurance Award. For information about myTEAM TRIUMPH, the work they’re doing and how you can get involved, check out their website at www.mttwestmichigan.org. You can visit aimhigh.aimgr.org/ to learn more about the AIM High West MI Endurance award. Proceeds from the beer tent will support efforts to help people gain mobility. 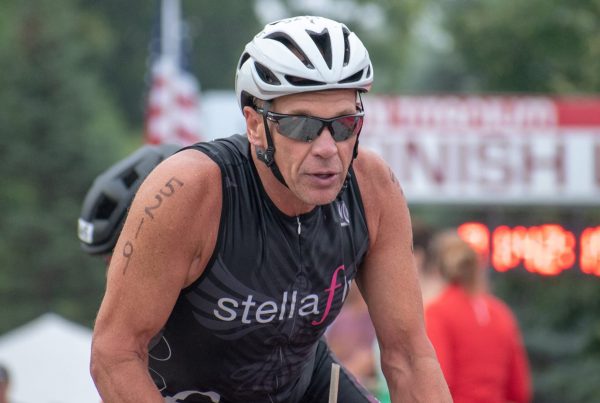